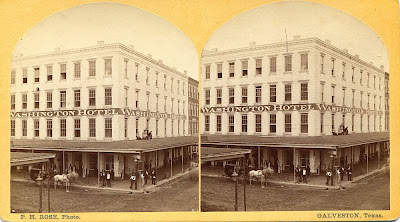 The history of Galveston's Washington Hotel (in its various incarnations) now spans well over 150 years. Never was it able to compete with the prestige of the Tremont Hotel, yet it was considerd by most to be in the top tier of island hostelries during the nineteenth century.

The first Washington Hotel seems to have started out as the Caravansary Hotel at the corner of Mechanic (Avenue C) and 21st Street, where the Cotton Exchange building now stands. Howard Barnstone says that it was built "in the building boom of 1838-1839 and lasted with additions and modifications on the same site until it was destroyed in 1877. It possessed something of the charm of an old New England inn...." [Howard Barnstone; The Galveston That Was, 1966, page 47.]

I have not found any further descriptions of the building, and the only drawing I've seen is a 1871 birdseye view of the roof from the backside angle, which doesn't provide much information. I am also unaware of any photographs available of the building. 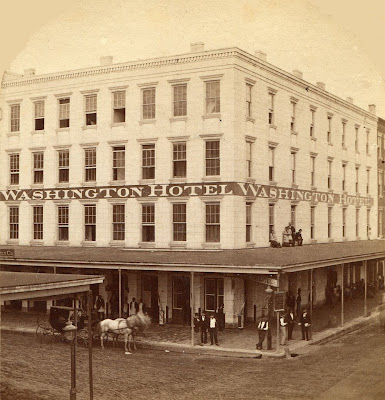 In November of 1841, the explorer and adventurer Josiah Gregg visited Galveston and noted in his diary that "I was assured the water was 1/2 feet deep upon the site of the hotel at which I stopped (the Caravansary Hotel). Notwithstanding these disadvantages, he found the town to be "handsome though too monotonous in appearance" and seemed destined to be the New York of Texas, "as it is conveniently located...."[Maurice Garland Fulton, editor; Diary & Letters of Josiah Gregg 1840-1847, 1941]

By 1843, the inn was known as Shaw's Hotel, owned by Joshua Clark Shaw, originally from Bath, Maine. When the Galveston Guard met for organization around 1839, the company elected Joshua C. Shaw First Lieutenant. He "was a prominent citizen, a member of the City Council and the proprietor of Shaw's Hotel, afterwards the Old Washington Hotel, which was torn down and removed to make way for the
Cotton Exchange building." [Charles W. Hayes; Galveston: History of the Island and the City, 1974 (1879), Volume 1, page 392-393.]

Joshua Shaw was born circa 1815 and had married Lucy Parker Weston (ca1815-ca1851) of Bangor, Maine, before moving to Galveston around 1837. They had 3 children. Joshua married, soon after the death of his first wife, to Elnina S. Williams in July of 1852 at Galveston. Hayes also states that Shaw was Alderman for the First Ward in 1840. [ibid, page 364.] For the City Council election of March, 1843,
Shaw's Hotel was the polling place for the Second Ward. Shaw was elected Alderman for the Second Ward in that contest, and again in March of 1844. [ibid, page 432-434]

By the middle of 1850, when the Federal Census was taken, Shaw was listed as the proprietor of the Tremont House. "Shaw was for a long time 'mine host' at the old Tremont Hotel, 'the' hotel of Galveston until destroyed by fire, in 1867." [ibid, page 393.] 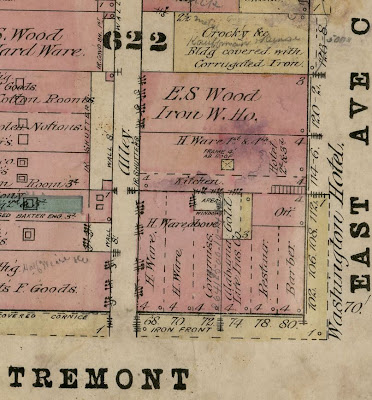 In a newspaper ad of 1844 Shaw's Hotel touts that "This establishment is now ready to receive Boarders at reduced prices, and the Proprietor flatters himself that the accommodatons and fare are as good as can be had at any house in the city. He pledges himself that no pains shall be spared to make his House pleasant and agreeable to all who may favor him with their company." Board and lodging ran $1.25 per day, $7.00 per week, and $30.00 per month. These prices included a room and three meals. The Tremont House rates were similar, except for the daily rate, which was only $1.00 a day. [Telegraph and Texas Register, Houston, Texas, May 15, 1844.]

Charles Louis Beissner emigrated to Galveston in 1842, leasing the old Planter's House hotel where "it became, under his careful supervision, one of the most popular hostelries in the city." In August of 1845 he "secured a lease on the old Caravansary... changing its name to the Washington Hotel." He remodeled and improved the inn, and it "soon became a favorite hotel and maintained its popularity during the twenty-three years that Mr. Beissner presided over its well-spread board. In 1849 he purchased the property of Colonel John S. Sydnor, and shortly after added the three-story frame edition [sic] that stood on the alley." [Charles W. Hayes; Galveston: History of the Island and the City, 1974 (1879), Volume 1, page 911.]

Beissner had married Helen Heydenreich of Bremen, Germany in 1837, and brought her over in 1844, along with their child. In the 1850 Galveston Census, Charles Beissner (b.1810) was enumerated as Inn Keeper, with his second wife Magdaline (b.1820) and their five children. He was elected as a City Alderman in 1849, and served for three years. He was again elected in 1854 and served until around 1858. "In 1867 Mr. Beissner sold the Washington Hotel to Moses F. Thompson of Houston, and retired from business on an ample fortune, and is now spending the evening of his days in the city of Bremen..." [ibid, page 911-912.] 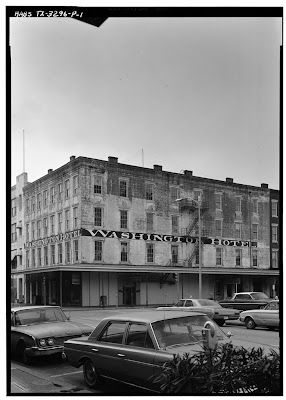 The first Washington Hotel building was destroyed by fire in 1877, according to Barnstone. [Howard Barnstone; The Galveston That Was, 1966, page 47.] It is unclear to me, until I can access the City Directories for these years, whether the hotel was still in business at the time of the June of 1877 fire.

The second incarnation of the Washington Hotel begins, according to Barnstone, in 1871. Originally known as the Cosmopolitan Hotel, by 1877 it had been renamed the Washington Hotel. Barnstone writes that "perhaps John P. Davie, who built the present building, felt that some of the success of the hostelry would rub off on the new structure if the name were the same." [ibid, page 47.] There is mention of the Cosmopolitan Hotel in May of 1874. [Earle B. Young; Galveston and the Great West, 1997, page 42] 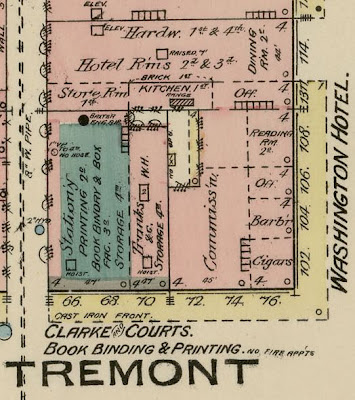 "On the surface an example of very late Galveston Greek Revival, the Washington Hotel is in fact a combination of styles. One first thinks of the eighteenth century, a moment later of Federal and then of the mid-nineteenth century.... Where is the usual Victorian exerberance? There is no suggestion here of the Romantric Revival.

"How did it happen that a building of this size and importance was built in a style of almost fifty years old? Was it the archconservative nature of the architect or owner? Was it the innocence of the designer who thought style stood still? Or, perhaps most likely of all, was it the fulfilled ambition of the owner, who in his poverty-ridden childhood had dreamed of one day living in an establishment as gracious as the mansions of his youth? Whatever the answer, the Washington Hotel cements and reflects the love affair with the Greek Revival seen everywhere in the Galveston vernacular architecture of the time - the houses built by carpenters in what was known as the 'Galveston style.'

"The influence of the Hendley Building is seen in the general composure of the elevations, although the ground floor with its succession of French doors and fanlight windows is a great deal more delicate. Its elegance indeed suggests an egress to a terrace and an elaborate eighteenth-century garden rather than to a cluttered sidewalk.

"The structure of the four-story building is brick, traditionally stuccoed to look like stone, with floor joists supported on the exterior walls and on interior cast-iron columns. The sidewalk canopy, like that of the Hendley Building,  seems an afterthought though it was built with the building. Galveston designers seemed to feel that a canopy was an unimportant or even an invisible detail and they never came to grips with the element, though it plays such a strong role in the appearance of the structure.

"The Washington Hotel never 'made it' as a large important downtown hotel. It had the mighty competiton of the Tremont, the social center and prestige address.

"Mr. Davie died twenty-one years  after the building was completed and willed his property to the Galveston Orphans Home. His heirs seemed to take considerable exception to this civic and philanthropic act and it was not until 1955 that the last of the lawsuits were even filed - this time by a granddaughter who died in the same year. In 1958, sixty-six years after the death of Mr. Davie, the case was finally settled and the building sold." [Howard Barnstone; The Galveston That Was, 1966, page 47, with the address wrongly assigned to
Twenty-second Street and Avenue C.; also, Galveston Tribune, Nov 22, 1958; also, Files of the Stewart Title Company.] 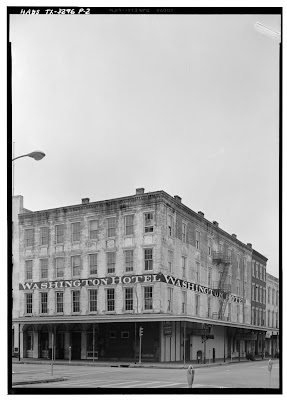 John W. Fisher (b1858) moved to Galveston in 1895, and quickly bought the Washington Hotel. After only one year of management, he sold out and moved on to El Paso.

During the Great Galveston Storm of 1900 there were several stories related to the Washington Hotel. One unidentified survivor said. "At 2 o'clock my wife and I waded into the Washington Hotel. From that time on the wind grew stronger. At 5 o'clock the water was six feet deep in the lower floor of the Washington Hotel. Why, it covered the telephone box in the office." Another story tells of the Blum family arriving "at daylight Sunday morning with nothing on them but shreds. They had lost everything."

"I. Thompson, a young man who was very active in saving life during the night of the storm, became insane because of the awful scenes he witnessed. One evening he retired to his room on the third floor of the Washington Hotel, seemingly sane. Soon afterwards he began to moan, and soon became violent, rushing from one side of his room to the other, and declaring his determination to commit suicide. Employees of the hotel did all they could to pacify the man, and during the night he became more rational and lay down. In the morning it was found that Thompson had wrenched the shutters off his window and leaped out upon an awning and thence to the street. It is believed he ran to the bay and threw himself in, because he was not seen again.' [Paul Lester; The Great Galveston Disaster, 1900, page 204-5.] 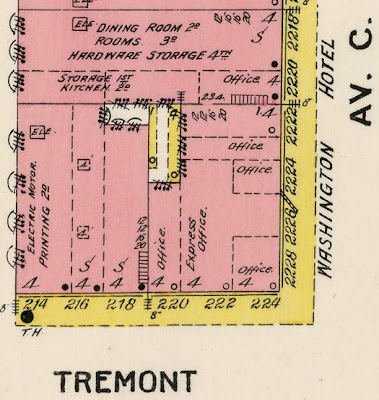 Over the course of the twentieth-century, the hotel slid into disrepair, most probably because of the extended lawsuits which clouded the buildings future. In the mid-1960s, Howard Barnstone's important survey of Galveston's architectural heritage shone a light on the Washington Hotel. It was then a fairly seedy boarding house, situated in a depressed downtown area. Yhe hotel was at that time owned by James Brady, a Galveston attorney, who then sold it to Don Welch of Texas City. [Douglas R. Zwiener and Elizabeth Darst; A Guide to Historic Galveston, 1966, page 8.]

In 1980 the Historic American Buildings Survey reports that "Although simple in appearance, the building has double French doors with fanlights on the first floor. The painted letters, 'Washington Hotel' occupies south (front) and west walls between second and third floor windows." No architect was named. [Historic American Buildings Survey, 1980, citing Howard Barnstone's The Galveston That Was, 1966 as their source for information.]

The Washington Hotel Building, 2228 Ship’s Mechanic Row was acquired by Cynthia and George Mitchell in 1982. The four-story hotel, after having withstood the high winds of Hurricane Alicia, was heavily damaged on August 25, 1983 by a fire that swept through the historic downtown area. Witnesses claimed that flames leapt 50 feet into the air as one of the hotel's walls collapsed. The building, which was called a "total loss," was restored by the Mitchell's at a cost of $4 million in 1987. The building is presently managed by Mitchell Historic Properties which are owned by Cynthia and George Mitchell and the Mitchell family. 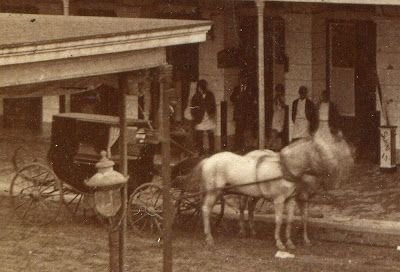 The Negro waiters in black coats and white aprons on the far left side of the original stereoview above. There is a restaurant noted in the Sanborn map of 1877 that are in the later editions shown as offices. This helps in putting a date on the photograph. 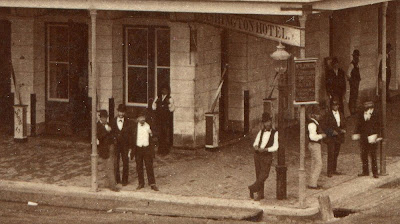 The barber shop is located on the corner with what are to me rather unusual 3 to 4 foot long striped poles mounted at about a 10 degree angle out of 30 inch tall stands announcing a 15 cent shave.
Posted by Greg at 7:01 PM