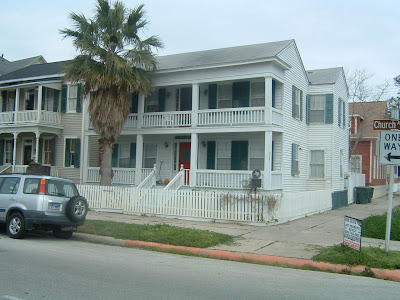 Sometime between 1852-54, Wilbur Cherry built his Greek Revival house at 1602 Church Street and lived in it for an unknown length of time, probably until his death in 1873. No architect has been assigned this house, and one speculation is that Cherry himself designed the residence. In an interview in the August 10, 1967 Galveston News, Miss Alice Cherry stated that she remembered her grandmother Catherine Cherry "saying the lumber was bought from Mobile, Ala. It had low ceilings. The Yankees didn't build high ceilings," she chuckled.

On November 13, 1885 a disasterous fire erupted at the Vulcan Foundry on Ave. A between 16th and 17th streets, and swept through the area of the city in which the house is located, consuming some forty blocks. This house was one of the few that were not burned.

Miss Alice Cherry related that "grandma" Catherine "didn't have a speck of insurance. She kept saying that if the house only survived that fire, she would get fire insurance the next day. Well, the house was spared and she had to get insurance. But, you know, she never needed it afterwards.

This house represents the typical less-pretentious Greek Revival residence of the early days of Galveston. The simple lines of the house exhibit no applied or meaningless decorations. Anne Brindley noted in her book "Historic Galveston Homes" that the house was "built for comfort and not for show."

It is a two story frame building with the typical central hall flanked on each side by one room. A double gallery extends across the front and is supported by square wood pillars. The roof is gabled and exterior chimneys, removed sometime after 1967, were located at each end gable.

Several additions have been added to the rear. The largest is a one room, two-story addition at the northeast corner of the house. All additions appear to be much later than the house.

In 1967, the Cherry House was one of 25 Galveston structures singled out for study for the Historic American Buildings Survey by John C. Garner, Jr. The following description comes from his inventory. My comments are in brackets.

The overall dimensions of the house measures, before the later additions, 20' x 36', including the 5' deep gallery. Erected on brick pier foundations, the building is a heavy braced-framed structure with weatherboard siding, which was covered by aluminum siding [before 1967, and since removed].

A three bay double gallery extends across the front facade. It is supported by square pillars having simple antae moldings for capitals. A wood railing encloses the porch. Access to the porch is by a set of wooden steps in the central bay.

The entrance doorway is typical of this style, having glass transom and side-lights. All the windows are six-over-six light double-hung wood sash. The roof is a simple gable with a characteristic classical molded cornice makes a return at each end.

The original house consisted of a central stair-hall flanked by a parlor at each side. In later years other additions have been added at the rear. Located on the west wall of the hall, the stairway is a quarter-turn stair with winders and has a heavy but simple newel post and railing. [This staircase is still in its original location.]

All floors are wood and appear to be modern. [Since Hurricane Ike of 2008, the floors were covered in oak laminate flooring.] Ceilings have modern fiber tiles. [Since replaced by sheetrock.]

Typical molded four panel wood doors. [Interior doors have all been replaced, at least on the first floor. The front door may be original, though with the large pane of glass replaced with plastic.]

Some original pintel [sic] hinges and rim locks of the period are extant. [I have seen no pintle hinges, and while the front door is certainly old and may be original, it's locks are much later.]

Typical wood molded trim around doors and windows. [All replaced since Ike, at least on the first floor.] Fireplaces covered. [Removed since 1967.]

The house was sold off after the death of Catherine Cherry in 1908. The first owner of the house after the Cherry's was Ernest F. Schmidt, who remodeled it into apartments. The house had to have been virtually gutted adding bathrooms and kitchens for four apartments. The owner of the house in 1967 was Mrs. Beatrice C. Gutierrez. She said she bought it through a realtor "about 10 years ago."

Sometime after the 1967 inventory the fireplaces were removed. Repairs made after Hurricane Ike also caused a further loss of original interior features, especially on the first floor. In August of 1979, the house was listed for sale for $38,750.00. In June of 1985, it was again offered for sale, but there was no posted price this time.

At the rear of the property, along the alley, is a large wood house that was originally located on the St. Mary's Cathedral Basilica property at 20th and Church streets. After completion of the new rectory in 1907 Catherine Cherry paid $100 for the building and spent $250 to move it to her property. 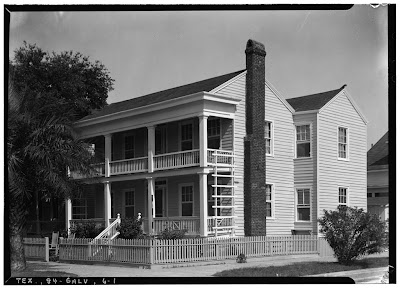 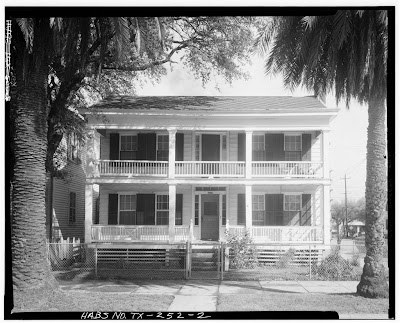