Old Red on a 1905 Victorian Postcard 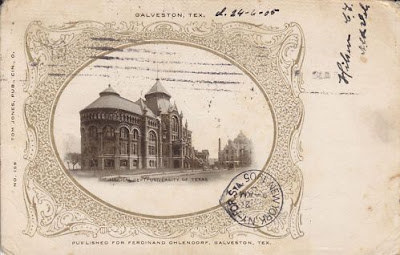 Here's a nice early postcard of Old Red, also known as the University of Texas Medical College Building, with construction begun in 1890 under supervision of architect Nicholas J. Clayton. This view actually dates from before the 1900 Storm, showing the central cupola and a conical roof-cap on the visible wing, both of which were damaged in the hurricane, and removed. (See below for post-storm postcard view.)

This so-called 'Undivided Back Postcard' from 1901-1907, was postmarked June 24, 1905 in Galveston, routed through New York City, and arriving at its destination in Bergen, Norway on July 6. The card was published for Ferdinand Ohlendorf, a bookseller in Galveston, by the Tom Jones Company of Cincinnati, Ohio. Ohlendorf's bookstore, which also sold stationery, fountain pens, pencils, students note books, magazines, newspapers and of course, postcards, was located at 2015 Market Street. 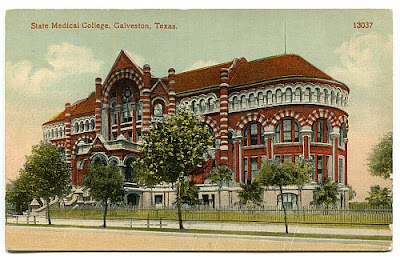 This postcard shows the Medical College after the 1900 Storm with the reconstructed roof.  The damage to the roof of Old Red allowed for the addition of sky lights, which had always been wanted for the dissection room.
Posted by Greg at 1:47 PM