Gruetzmacher Print Shop on the Strand

The late Frank Heizer sent me the photograph below showing Ritter's Saloon and Cafe (owned by Thomas Ritter, 1848-1903) immediately after the 1900 Galveston Storm. His e-mail got my juices flowing, and I did a little research into the family legend that it was the Gruetzmacher's printing presses that crashed through the ceiling into Ritter's Cafe, killing several customers. 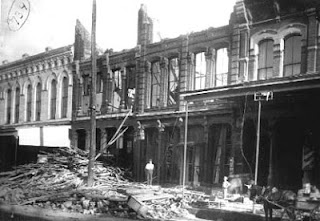 First off, I checked my records for the location of Paul Gruetzmacher's shop, finding it located at 2109 Strand (on the 2nd floor), circa 1896, which was the last confirmed date I have. After that date, Paul is mentioned in the city directories as a printer, but gives no business address.

The building at 2109 Strand was built for Clara (nee Gruetzmacher) Lang in 1887-1888. Clara was the sister of the printer Paul Gruetzmacher.
I was able to confirm with the Rosenberg Library that Ritter's was also located at 2109 Strand, and not on Mechanic street, as had been stated in at least one report. According to the Sanborn Insurance maps for 1899 Galveston, the address of 2109 Strand was assigned to the second building from 21st street, on the south side. In the photo above, this is the 4-story dark-colored building with the large pile of wreckage in front. The top floors were blown away by the 100-120 mph hurricane winds. This building is still standing, and is the (now) two-story building painted green in the modern photo, below.
To give you an idea of where this building is, it is located across and down the street from The Old Strand Emporium, which has been a fixture on the street for at least the last 35 years. 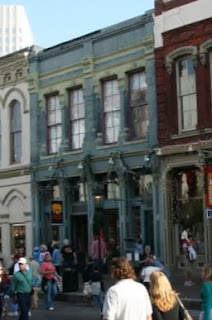 So, now we know that it may have indeed been Paul Gruetzmacher's printing presses that fell through the ceiling of Ritter's Cafe the afternoon of the storm, resulting in the first fatalities of the deadly hurricane. One first-hand report had called it "a strongly-built brick building, which was thought to be very safe" As the wind increased in velocity, "a blast of wind tore the roof from the building, collapsing the ceiling onto the ground-floor dining room. Desks, chairs and presses from the printing shop on the second floor crashed onto the diners."
One of these days, I will pore through the daily Galveston newspapers just prior to the Storm to see if I can find any mention of Paul Gruetzmacher's shop being open. I think there is a good possibility that the presses on the 2nd floor at 2109 Strand were indeed Paul's.
Posted by Greg at 11:15 AM