The Harmony Hall No. 6, the extravagant Scottish Rite Temple was designed by architect Nicholas J. Clayton. 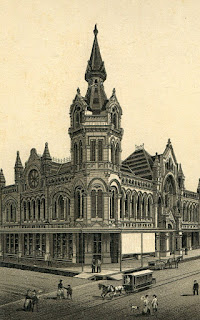 This Masonic Temple was situated at the southeast corner of 21st and Post Office Streets. Its cornerstone was laid in 1882 and completed in 1884.

The leading features of the architecture style were its plaster buttresses and Gothic detail engrafted on classic forms of the Italian renaissance, with the distinctive details of each style modified in a harmonious manner to blend the pleasing features of each. A preponderance of Gothic outlines was maintained in the arched construction, the tracery of the openings, and other salient features of this distinctively Northern European style.

The buildings corner tower was sheared off during the 1900 Storm, and not replaced. Sadly, the building was later destroyed by fire in 1928.

A front page story in The Galveston Daily News on the following day said: “A demon fire licked his way ravenously through the rich furnishings, gutted the building, cracked its wall with fiery breath, and sent flying debris into the streets where thousands of Galvestonians stood helplessly by.” 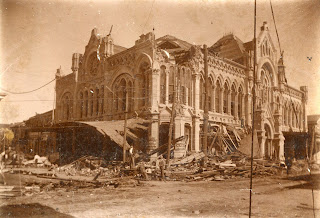 “Back then, many of the Masons worked downtown and even as the building burned, they were able to save many of the library books and some of the furniture,” said Abbie Hughes, a master Mason and member of the Scottish Rite for 56 years.

“They moved almost everything, even the grandfather clock, from the hall’s first floor to the Kahn & Levy Building directly across the street. Levy, a Mason, stored them until the new building was complete.”

The elaborate Italian marble staircase also was saved, salvaged from the charred remains.

“It was removed piece by piece, cleaned and given a place in our new home,” Wood said.

In fact, the surviving staircase became a centerpiece for the current cathedral, the Art Deco masterpiece designed by Alfred C. Finn.
Posted by Greg at 2:46 PM