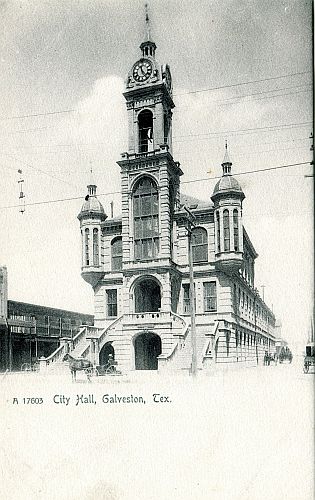 Speaking of City Hall, here are two postcard views of the City Hall and Farmers Market, shown from the south. Both views offer the same building from the same perspective, but there are slight variances, other than the artistic freedoms taken in the drawn and colored version.

The first postcard (above, click to enlarge) was based on a real photograph and printed in the rotograph method. This postcard is from my personal collection, and is undated, but circa 1900. Note on the third level that the offices extend back only a short ways, well under half the length of the building.

The second postcard (below, click to enlarge) is a hand-drafted drawing and printed in color. The card is also from my collection, and is postmarked 1908. A close look at the third floor show the offices now extend almost all the way to the end of the building. 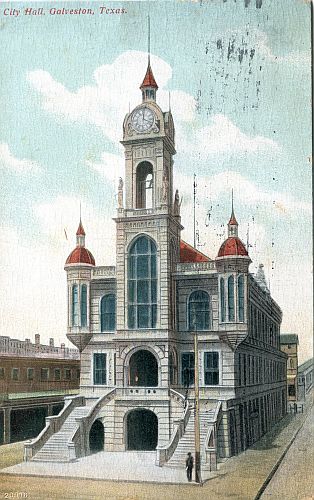 Howard Barnstone, in "The Galveston That Was", states, "It was once a fine example of the French Renaissance.... [T]he ground floor base is a highly rusticated firm foundation on which sits a myriad of columns, statues and architectural paraphernalia ranging from fourteenth-century English windows to sixteenth-century Italian balustrades and eighteenth-century American pilasters and garlands. Springing from the east and west corners of the south elevation were minaretlike round bays (oriels) rather precariously hung and crowned with mansard tile roofs and open fleches. The central tower had an open Palladian-motif pass-through below the clock."

"The building was three stories high," Barnstone continues, "with the farmers' market occupying the ground floor; the other two floors were city offices. The north portico, with its eight Ionic columns and decorated frieze, made an imposing sight. The grand stairways on the east and west sides made the building look even larger." 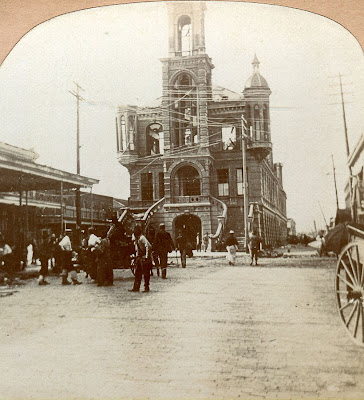 Photo of damaged City Hall after the 1900 Storm
"In the hurricane of 1900 the building , though severely damaged, was used as a refuge for the victims." Barnstone closes with a description of the building as it existed, circa 1965. "Architecturally, the building has been completely ruined since. The third story and tower have been removed and, where there had been statuary and other architectural motifs, signs designating the north section as the police department, and the south section as the central fire station have been installed."

If someone has a picture they can share of the City Hall building in its final indignity, I would gladly add it to this article. Thank you.
Posted by Greg at 6:26 PM