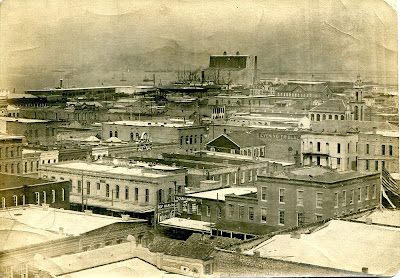 This pre-1890 birdseye view of Galveston was taken from the roof of the second Tremont Hotel (1872-1928) at the corner of Tremont (23rd) and Avenue F (Church Street). The photographer was probably Paul H. Naschke and his camera was aimed to the northeast, with Grain Elevator 'A' at the foot of 14th Street and Wharf in the background. The Texas History Center of the Rosenberg Library has a similar photo credited to Naschke from the same viewpoint and dated circa 1890s. But there are enough differences between the two photos to date this version as an earlier view. 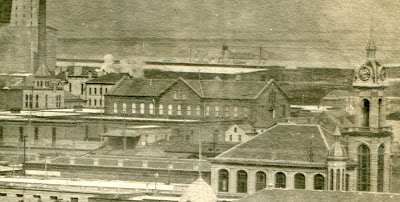 Shown here in this close-up is the side view of the old City Hall that was situated in the middle of 20th Street between Mechanic and Market streets. Visible is the distinctive clock tower which was lost in the 1900 Storm, along with the 3rd story offices with 6 windows on the western side. At an unknown later date the 3rd floor seems to have been expanded to at least double the length seen here. The Rosenberg's Naschke photo, mentioned above, had at least 12 windows on the 3rd floor.

The 1888 building was designed by the architect Alfred Muller, who declared the building his "masterpiece". The general contractor was Frank Jones, calling it one of the most elaborate and intricate he had ever constructed. The building was three stories high, with a farmers market on the ground floor and city offices on the 2nd and 3rd levels. The clock tower rose 108 feet from the base to the clock. Above the clock was a pinnacle 30 feet high. 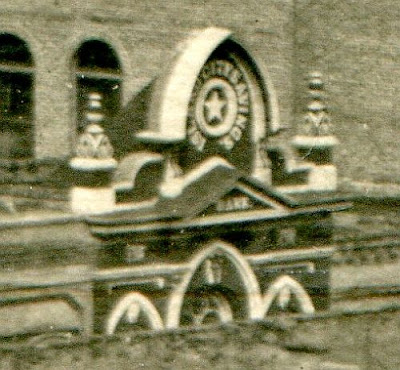 Seen in this close-up is the Island City Savings Bank Building. Sadly, I have not been able to find anything about this building; its architect, its date of construction, or even its location. If anyone knows anything about the building, please let me know. At one point, Morris Lasker was President of the bank. He hired Nicholas J. Clayton to build the Romanesque Lasker House in 1889, so perhaps Lasker commissioned Clayton to design the bank building also.
Posted by Greg at 12:03 AM