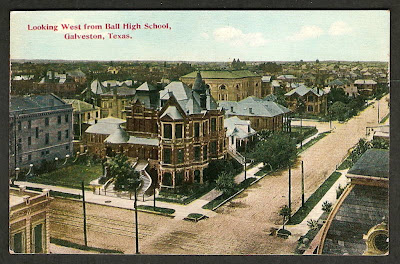 If you're like me, you have an interest in views of Galveston. I have collected postcards of Galveston for the last ten years or so, especially those postcard views that highlight its turn-of-the-century architecture, be it houses, commercial buildings, or government offices.

Tonight on eBay a new to me "birdseye view", circa 1909, sold for $32.00. Sadly, not to me! Obviously, it appears to be a particularly scarce postcard for it to sell for so much. I copied the view from the website so I could share until I can find a copy I can afford.

The postcard is entitles "Looking West from Ball High School, Galveston, Texas." I have identified this residence as the Herman Marwitz House, also known as the "Marwitz Castle" or the "Old Castle". Located at 801 22nd Street, it was built between 1890 and 1894. Designed in the Queen Anne style by Marwitz's nephew, the architect Alfred Muller, the three-story mansion was built with bricks over a stone foundation. 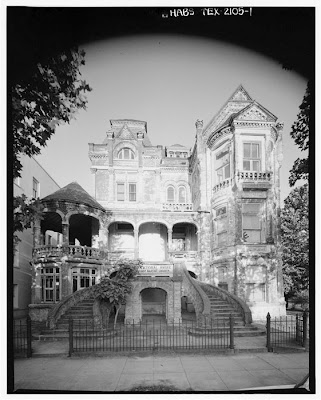 This wonderfully designed Victorian mansion sports a distinctive facade and a set of sweeping double-entry stairs. "The exterior elements include an elliptical arcaded porch with a circular corner pavilion and a monumental curving stair ascending to the entrance level. The second story bay is delineated by stone balusters with rich Victorian detail throughout. The structure is capped by gabled and mansard roofs." [Historic American Buildings Survey Habs-TX 2105]

Construction of the house nearly wiped out Marwitz's checkbook, despite his position as president of the Street Railway Company and the Galveston Savings Bank. After completion, he decided that rather then live there, he would lease it out to the Goldbeck College of Music. Marwitz died in 1899, and by the time of the 1900 Storm, the residence served as a women's boardinghouse.

Upon review of the Sanborn Insurance map of 1912, the building is listed as a boarding house, at the southwest corner of Ball and 22nd, directly across the street from Eaton Chapel. That is one fine boarding house. Its use eventually devolved to that of a whorehouse before being bought by the First Baptist Church in 1931. It was demolished in 1969.
Posted by Greg at 12:58 AM