A few years ago I was able to acquire a large (12 x 17 cm.) photograph entitled "Site of the F. W. Medlenka Bakery" taken soon after the Galveston Storm of 1900. The photographer, who stamped his name on the embossed mount, was [Victor J.] Biron of Galveston. The photograph certainly shows its age, with fading and surface scratches, but is still an interesting view, historically.

Ferdinand Medlenka was born in Galveston around October of 1861 to Antone Medlenka, a tailor from Bohemia. He married in Galveston on November 15, 1882 Emma Nelson, born May 27, 1860 in Galveston, and died in Houston May 7, 1919. She was the daughter of Pete Nelson, of Denmark, and Willa Meda, of Germany.

Ferdinand and Emma had five children, as listed in the June, 1900 Federal Census. Of their two daughters, Irene and Oralee, I know nothing further. Their three sons were Ferdinand Jr., Joseph, and Flore. Fred Medlenka was born December 31, 1883 and died in June of 1963. Joseph was born July 29, 1887 and died in February of 1967 in Houston. Flore W. was born April 13, 1888 in Galveston, and died January 14, 1967 in Houston. None of the family are found in the lists of the known dead from the 1900 Storm, but they could have been among the unidentified and unlisted. 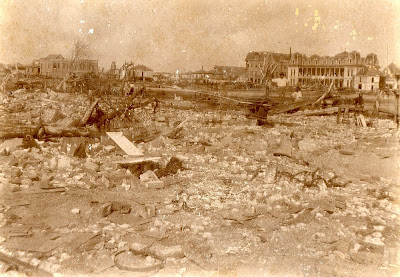 The Medlenka Bakery was located at 609 Church (or Avenue F) near 6th Street. According to the Sanborn Insurance map of 1899, the bakery was a one story building that fronted the property, and was attached to the two story house slightly set back from the unpaved street. At the front of the bakery was a large awning or shed, typical of Galveston storefronts, that reached to the street. The bake house and oven were in separate buildings out back along the alley, nearby the stables which possibly held a delivery wagon, along with the horses. 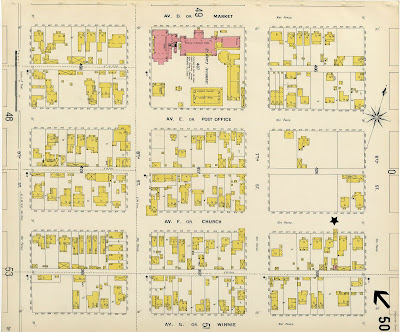 The Medlenka Bakery is in the map,with the star just above it. The photograph by Biron was taken roughly from the southeast corner (see arrow) towards the northwest. In the photo you can see the ruins of the house and bakery, as well as in the distance, the rear of St. Mary's Infirmary. The dormitory of the Sisters of Mercy was located along 7th Street, attached to the octagonal Chapel, both seen in the 1899 Sanborn map. 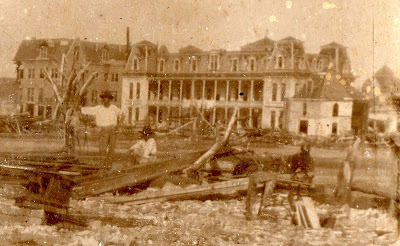 An extreme close-up of St. Mary's shows how the dormitory, along with the building facing Post Office Street housing the laundry and the Colored Ward, are completely destroyed. All that remains is the octagonal Chapel, with the connecting wall, on the right, completely missing. Among the debris being inspected by the two men in the foreground (and their trusty mule), appears to be railroad tracks, though I could be mistaken. If they are indeed rails, then they may have come from the nearby Galveston and Western Railroad along 9th Street. 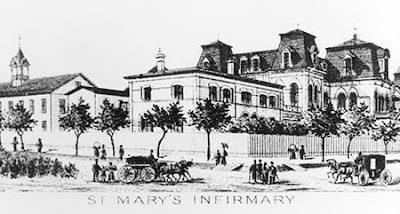 This undated drawing of St. Mary's showa the buldings from the corner of Avenue D (Market) and 7th Street. The Sister's Residence and childrens Dormitory is the building on the left with the cupola. 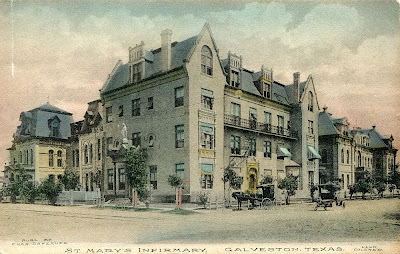 This handcolored postcard dates from around 1900-1910 and was published by Charles Daferner, the Galveston bookdealer and stationer. This view was taken from the corner of Avenue D (Market) and 8th Street. Note the horse and buggy and the early model automobile on 8th Street, and the streetcar or trolley tracks along Market.
Posted by Greg at 2:41 AM